​In brief, the Cleveland Memory Project, launched in 2002, is a freely searchable online collection of digital photos, texts, oral histories, videos and other local history resources, built by the Michael Schwartz Library at the Cleveland State University in collaboration with a host of community partners around Northeast Ohio.
More specifically:
Cleveland Memory is an engaging look at Cleveland History —Here serious researchers and casual browsers will find tens of thousands of historical photographs, as well as a growing collection of eBooks documenting the history of greater Cleveland and the Western Reserve region of northeastern Ohio, its industries and its people.
Rounding out this landscape of Cleveland's past is an expanding selection of vintage video and sound recordings. And all of this is delivered to you in a searchable, database that is constantly updated.
Explore Cleveland history through images and words.

Cleveland and Its Neighborhoods

​The Invasion of Cleveland by European

​IRISH. Cleveland's Irish population, like that in many other cities, did not reach a significant number until the potato famine immigrations in the late 1840s. Unlike those in many Eastern Seaboard cities, Cleveland's Irish never exerted influence beyond their numbers, though they have been part of the city's diverse ethnic community and activities since the first immigrants from Ireland arrived ca. 1820. The Irish continued to trickle into the city, and approx. 500 were in Cleveland in 1826, many of them helping to build the OHIO & ERIE CANAL. But the Irish population did not reach significant proportions until 1848, when 1,024 immigrants were in Cleveland. Reflecting the clannishness of their forebears
http://www.clevelandmemory.org/iac/history.html

POLES. Poles formed one of Cleveland's largest nationality groups in the 20th century and had an important influence on the city, particularly during its period of heavy industrial growth. Individuals may have visited or temporarily settled in the area before the Civil War, but the first cohesive settlement of Poles occurred in BEREA in the late 1860s, where they were employed in the stone quarries. At about this time, isolated groups of Poles arrived in Cleveland; 77 were counted in the 1870 census. The Cleveland Poles did not form a specific neighborhood at this time but settled within the Czech community around Croton Street. Several factors subsequently increased Polish migration to Cleveland, especially German cultural pressures in Prussian Poland and poverty and repression in Russian Poland. Combined with relatively safe and inexpensive ocean transport and the need for ...
​https://case.edu/ech/articles/p/poles

SLOVAKS. At one time in the early 1900s, Cleveland was reputedly the city with the largest number of Slovaks in the world. As of 1970 an estimated 48,000 persons of Slovak birth or ancestry resided in Greater Cleveland, making Slovaks one of the city's major immigrant groups. However, it is impossible to deduce the exact number of Slovaks resident in the city at any time, since, except for a brief period during WORLD WAR II, the Slovak state has not existed in modern times. Slovak immigrants were therefore listed as Austrian or Hungarian prior to WORLD WAR I, or as Czechoslovakian following the war. This lack of official identity forms, perhaps, the main aspect of the local community's history; one of its chief goals has been the recognition of its ethnic distinctiveness as well as of its cultural contributions.
Immigration to Cleveland began in the late 1870s, when the city's immigrant officer began counting a large number of "Slavonians" (perhaps Slovaks and SLOVENES) arriving in the city. It is estimated that there were 35,000 Slovaks in the city by...
https://case.edu/ech/articles/s/slovaks

​SLOVENES, a South Slav people whose homeland, Slovenia, declared its independence from Yugoslavia in 1991, began settling in Cleveland in the 1880s, with immigration heaviest in the periods 1890-1914, 1919-24, and 1949-60. Prior to WORLD WAR II, most emigrants were peasants from the economically underdeveloped rural areas of Slovenia, looking for economic betterment. The Slovenes who came after World War II were mainly political refugees, including a larger proportion of well-educated and professional individuals. The community was augmented by the 2nd generation, and also by Slovenes who came from elsewhere in the U.S. Cleveland became a magnet for Slovenes because of its rapidly expanding industrial base, requiring large numbers of unskilled and semiskilled laborers. Census data for 1910 listed 14,332 Slovenes in Cleveland, making it at the time the 3rd-largest Slovene city in the world. The 1970 census listed 46,000 foreign-born or mixed-parentage Slovenes in the Cleveland area. By the early 1900s, Cleveland had the largest Slovene settlement in the U.S., retaining that status into the 1990s.
The first Slovenes to arrive in Cleveland settled in the NEWBURGH area and found employment in the nearby steel industry. By the later 1880s and

​​On 21 November 1995, in Dayton, Ohio, the warring parties initialed a peace agreement that ended three years of interethnic civil strife (the final agreement was signed in Paris on 14 December 1995).

CZECHS
​Cleveland's Czech community forms one of the city's oldest and largest ethnic groups. Approximately 37,000 people of Czech birth or background resided in the metropolitan area in the 1990s. The term Czech refers collectively to Bohemians, Moravians, and Silesians. Czechs immigrated to America and settled in Cleveland in three distinct waves. The first major migration began when political persecution by the Austrian government forced many well-educated Czechs to flee their homeland. Some had participated in an unsuccessful revolt against the Austrian government in 1848. Peasants and skilled craftsmen from the villages also immigrated to America between 1848 and 1870. Unlike some immigrant groups of this period, the Czech immigration consisted primarily of family units whose intention was to settle permanently, many hoping to homestead in Nebraska, Iowa, and Wisconsin. Immigrants who stopped to rest along the way in cities such as Cleveland often found a haven where they settled and welcomed fellow immigrants...
Encyclopedia of Cleveland History
​https://case.edu/ech/articles/c/czechs

​CLEVELAND, city situated in Northeast Ohio on Lake Erie. Its metropolitan area has the largest Jewish population in the state (81,500 in 1996). Jewish settlement began in the 1830s, when Daniel Maduro Peixotto (1800–43) joined the faculty of Willoughby Medical College in 1836 and Simson Thorman (1812–1881), a trader in hides, came from Unsleben, Bavaria, settling permanently in Cleveland in 1837. The opening of the Ohio and Erie canals and the development of stage routes provided countless economic opportunities for new immigrants, and Thorman must have written to his family in Unsleben; in 1839 a group of 19 departed on the sailing shipHoward and 15 made the trip to Cleveland, arriving in July of that year, joining two other men who had emigrated from Unsleben.
​http://teachingcleveland.org/the-history-of-jewish-cleveland/ 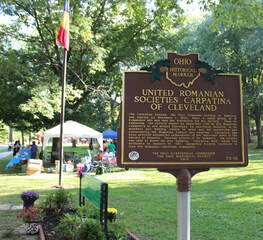 ​ROMANIANS
​Among the new Southern and East European immigrants coming to Cleveland in the late 1800s were an increasing number of ethnic Romanians, most from the province of Transylvania, at that time part of Austria-Hungary. Other Cleveland Romanians came from the province of Bucovina on the Polish and Russian borders, also part of Austria-Hungary before WORLD WAR I. There were also a number of JEWS from the Old Kingdom of Romania. The first Romanians in any significant numbers came to Cleveland as solitary immigrants, usually at the urging of Hungarian, Saxon, Swabian, and Jewish acquaintances from back home, who had emigrated earlier. The flow of Romanian immigrants grew steadily and continued unabated until the outbreak of World War I. By that time, there were about 12,000 ethnic Romanians in Cleveland, overwhelmingly of peasant stock who found immigration an alternative to the restrictive social, political, and economic possibilities in their homeland. Romanians settled near their places of employment, so they could walk to and from work. The largest concentration was on the west side...
Encyclopedia of Cleveland History
https://case.edu/ech/articles/r/romanians

ITALIANS. Although Italian names can be found in Cleveland city directories from the late 1850s, not until the Civil War did an Italian community begin forming in the city. The 1870 census listed 35 Italians in Cleveland; during the following 50 years, more than 20,000 Italian immigrants came to the city. Most immigrants were contadini (peasants) from the Mezzogiorno (southern Italy), where extreme poverty and government negligence brought unbearable hardship. The history of Cleveland's Italians comprises 3 separate stages: formation (1870-1929); transformation (1930-45); and realization (1945 to the present).
By the late 1920s, the formative period was complete; 6 Italian neighborhoods had been established. The largest was BIG ITALY, located along Woodland and Orange avenues from E. 9th St. to E. 40th St. LITTLE ITALY, centered at Mayfield and Murray Hill roads, proved the most enduring of the settlements. Nearby, at...
​https://case.edu/ech/articles/i/italians