This course examines the history of the United States of America from 1877 to the present. The federal republic has withstood challenges to its national security and expanded the rights and roles of its citizens. The episodes of its past have shaped the nature of the country today and prepared it to attend to the challenges of tomorrow. Understanding how these events came to pass and their meaning for today’s citizens is the purpose of this course. The concepts of historical thinking introduced in earlier grades continue to build with students locating and analyzing primary and secondary sources from multiple perspectives to draw conclusions.

HISTORY: America the Story of Us

​America The Story of Us is an epic 12-hour television event that tells the extraordinary story of how America was invented. With highly realistic CGI animation, dramatic recreations and thoughtful insights from some of America’s most respected artists, business leaders, academics and intellectuals, it is the first television event in nearly 40 years to present a comprehensive telling of America’s history. Elaborate, ambitious and cinematic, America The Story of Us will take you into the moments when Americans harnessed technology to advance human progress, from the rigors of linking the continent by transcontinental railroad–the internet of its day–to triumphing over vertical space through the construction of steel structured buildings to putting a man on the moon. It is an intensive look at the people, places and things that have shaped our nation, and the tough and thrilling adventure that is America’s 400-year history.

By examining alternative courses of action, students can consider the possible consequences and outcomes of moments in history. It also allows them to appreciate the decisions of some individuals and the actions of some groups without putting 21st century values and interpretations on historic events.

How might the history of the United States be different if the participants in historical events had taken different courses of action? What if Democratic Party officeholders had not been restored to power in the South after Reconstruction, the U.S. had not engaged in the Spanish-American War or the U.S. had joined the League of Nations? What if the federal government had not used deficit spending policies during the Great Depression, Truman had not ordered atomic bombs dropped on Japan or African Americans had not protested for civil rights in the 1950s and 1960s?

2. The use of primary and secondary sources of information includes an examination of the credibility of each source.

The use of primary and secondary sources in the study of history includes an analysis of their credibility – that is, whether or not they are believable. This is accomplished by checking sources for:
Resource: History Matters
Resource: Primary Sources at Yale
Resource: The National Archives

3. Historians develop theses and use evidence to support or refute positions.Resource: Formal Writing in a Facing History Classroom
Resource: Incorporating Evidence Into Your Essay
Resource: NEH, EDSITEment - Eyewitness to History

4. Historians analyze cause, effect, sequence and correlation in historical events, including multiple causation and long- and short-term causal relations.

Read Articles About the Declaration:

The Articles of Confederation

The national government, under the Articles of Confederation, faced several critical problems. Some dealt with the structure of the government itself. These problems included weak provisions for ongoing management of national affairs (a lack of a separate executive branch), a limited ability to resolve disputes arising under the Articles (a lack of a separate judicial branch) and stiff requirements for passing legislation and amending the Articles. National issues facing the government included paying the debt from the Revolutionary War, the British refusal to evacuate forts on U.S. soil, the Spanish closure of the Mississippi River to American navigation and state disputes over land and trade. Economic problems in the states led to Shays’ Rebellion.

The Constitution of the United States strengthened the structure of the national government. Separate executive and judicial branches were established. More practical means of passing legislation and amending the Constitution were instituted. The new government would have the ability to address the issues facing the nation. Powers to levy taxes, raise armies and regulate commerce were given to Congress. The principle of federalism delineated the distribution of powers between the national government and the states.

The Constitution of the United States was drafted using Enlightenment ideas to create a workable form of government. The Preamble and the creation of a representative government reflect the idea of the social contract. Articles I – III provide for a separation of powers in government. Article I also provides some limited protection of rights.

The Constitution of the United States represented a significant departure from the Articles of Confederation. The document required ratification by nine states for the national government to be established among the ratifying states.

Proponents and opponents of the Constitution attempted to sway the deliberations of the ratifying conventions in the states. The proponents became known as Federalists and the opponents as Anti-Federalists.

New York was a pivotal state in the ratification process and Federalists prepared a series of essays published in that state’s newspapers to convince New York to support the Constitution. These essays have become known as the Federalist Papers and they addressed issues such as the need for national taxation, the benefits of a strong national defense, the safeguards in the distribution of powers and the protection of citizen rights. What has become known as the Anti-Federalist Papers is a collection of essays from a variety of contributors. While not an organized effort as the Federalist Papers were, the Anti-Federalist Papers raised issues relating to the threats posed by national taxation, the use of a standing army, the amount of national power versus state power and the inadequate protection of the people’s rights

Resource: The Library of Congress - The Federalist Papers
Resource: National Endowment for the Humanities – EDSITEment!

The Bill of Rights

It has been a century like no other. And ABC news is proud to present this extraordinary visual encyclopedia of America's last one hundred years. ABC News produced this 15-part series of documentaries on the 20th century and the rise of the United States as a superpower. that originally aired on the History Channel in April 1999. Unprecedented in scope The century: America's time recounts the defining moments, people, and trends that have shaped our nation.

Narrated by Peter Jennings, the 15 part series covers each decade is 6 volumes.

10. The rise of corporations, heavy industry, mechanized farming and technological innovations transformed the American economy from an agrarian to an increasingly urban industrial society.

Industrialization in the United States in the late 19th and early 20th centuries was characterized by the rise of corporations and heavy industry, which transformed the American economy. It marked a shift from a predominance of agricultural workers to a predominance of factory workers. It marked a shift from rural living to urban living, with more people living in crowded and unsanitary conditions.

HISTORY: The Men Who Built America 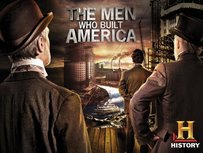 John D. Rockefeller, Cornelius Vanderbilt, Andrew Carnegie, Henry Ford and J.P. Morgan rose from obscurity and in the process built modern America. Their names hang on street signs, are etched into buildings and are a part of the fabric of history. These men created the American Dream and were the engine of capitalism as they transformed everything they touched in building the oil, rail, steel, shipping, automobile and finance industries. Their paths crossed repeatedly as they elected presidents, set economic policies and influenced major events of the 50 most formative years this country has ever known. From the Civil War to the Great Depression and World War I, they led the way.
www.history.com/shows/men-who-built-america
Episode 1: A New War Begins
Out of the turmoil of the Civil War, America enters an age of enlightenment that will change the landscape of the country forever. The growth is driven by five insightful men who will change the world forever.
Episode 2: Bloody Battles
As it recovers from the Civil War, America undertakes the largest building phase of the country's history. While much of the growth is driven by railroads and oil, it's built using steel.
Episode 3: Changing the Game
The steel and oil have forever changed the face of America, but they are just the beginning. JP Morgan arrives on the scene and expedites growth through finance.
Episode 4: When One Ends, Another Begins
Railroads, oil, steel and electricity have all been harnessed in less than 50 years, but the face of America is changing and will never be the same.

The United States in World War I

​America in World War I: Crash Course US History #30

​For additional resources and a listing of programs and activities happening around Ohio and the nation, visit the United States World War One Commission's website at www.worldwar1centennial.org.
The commemoration of Summit County and the Great War is supported in part by the Ohio History Connection.

17. Racial intolerance, anti-immigrant attitudes and the Red Scare contributed to social unrest after World War I.

18. An improved standard of living for many, combined with technological innovations in communication, transportation and industry, resulted in social and cultural changes and tensions.

Jazz: A Film By Ken Burns

21. During the 1930s, the U.S. government attempted to distance the country from earlier interventionist policies in the Western Hemisphere as well as retain an isolationist approach to events in Europe and Asia until the beginning of WWII.

The Vietnam War: A Film By Ken Burns & Lynn Novick

The Collapse of Communism

27. The collapse of communist governments in Eastern Europe and the USSR brought an end to the Cold War.
Resource: The Cold War Museum
Resource: Virtual Exhibits on Communism

The Cold War: The Role of Government

​The Rise of Conservatism: Crash Course US History #41

Ford, Carter, and the Economic Malaise: Crash Course US History #42

A New Age of Television

​The number of cable services aimed at specific audiences with specialized interests grew at its greatest pace ever during this period, dividing the audience into smaller and smaller segments. Inevitably, the share of that audience held by each of the major networks continued to decline, although each network was still attracting many more viewers than any of the cable channels. Besides the familiar cable services dedicated to news, sports, movies, shopping, and music, entire cable channels were devoted to cooking (Food Network), cartoons (Cartoon Network), old television (Nick at Nite, TV Land), old movies (American Movie Classics, Turner Classic Movies), home improvement and gardening (Home and Garden Television [HGTV]), comedy (Comedy Central), documentaries (Discovery Channel), animals (Animal Planet), and a host of other interests. The Golf Channel and the Game Show Network were perhaps the most emblematic of how far target programming could go during this era. By the end of the decade, almost 80 percent of American households had access to cable programming through cable hookups or direct delivery by satellite.
https://www.britannica.com/art/television-in-the-United-States/The-1990s-the-loss-of-shared-experience

33. The United States faced new political, national security and economic challenges in the post-Cold War world and following the attacks on September 11, 2001.

The post-Cold War period and the attacks on September 11, 2001, presented new challenges for the United States, including:
Economic challenges for the country included operating within a globalized economy. The country witnessed the change from the prosperity of the 1990s to the recession that began in 2007. Reductions in defense spending due to the end of the Cold War led to the loss of millions of U.S. jobs in defense plants.

The attacks on Sept. 11, 2001, presented national security challenges for the country. Debates over two wars (i.e., Iraq and Afghanistan) that were launched in response to the September 11 attacks, the passage of the USA PATRIOT Act and the detainment and torture of enemy combatants divided the country.

How the American people govern themselves at national, state and local levels of government is the basis for this course. Students can impact issues addressed by local governments through service learning and senior projects.