The dynamics of global interactions among nations and regions present issues that affect all humanity. These dynamics include competing beliefs and goals, methods of engagement, and conflict and cooperation. Contemporary issues have political, economic, social, historic and geographic components.

1. Trade, alliances, treaties and international organizations contribute to the increasing interconnectedness of nations and peoples in the 21st century.

Long-established global connections include:
Participation in these and other trading relationships, alliances, treaties or organizations has increased the interconnectedness of nations.

​The World Trade Organization (WTO) is the only global international organization dealing with the rules of trade between nations. At its heart are the WTO agreements, negotiated and signed by the bulk of the world’s trading nations and ratified in their parliaments. The goal is to ensure that trade flows as smoothly, predictably and freely as possible.
https://www.wto.org/index.htm

The North American Free Trade Agreement (NAFTA) is a treaty entered into by the United States, Canada, and Mexico; it went into effect on January 1, 1994. (Free trade had existed between the U.S. and Canada since 1989; NAFTA broadened that arrangement.)

OPEC is a permanent intergovernmental organization of 13 oil-exporting developing nations that coordinates and unifies the petroleum policies of its Member Countries
https://www.opec.org/opec_web/en/index.htm

​The most important players in the North Atlantic Treaty Organization are the member countries themselves.
THERE ARE CURRENTLY 30 MEMBERS
Security in our daily lives is key to our well-being. NATO’s purpose is to guarantee the freedom and security of its members through political and military means.
POLITICAL - NATO promotes democratic values and enables members to consult and cooperate on defence and security-related issues to solve problems, build trust and, in the long run, prevent conflict.
MILITARY - NATO is committed to the peaceful resolution of disputes. If diplomatic efforts fail, it has the military power to undertake crisis-management operations. These are carried out under the collective defence clause of NATO's founding treaty - Article 5 of the Washington Treaty or under a United Nations mandate, alone or in cooperation with other countries and international organisations.
https://www.nato.int/

​Lord Hastings Lionel Ismay was NATO’s first Secretary General, a position he was initially reluctant to accept. By the end of his tenure however, Ismay had become the biggest advocate of the organisation he had famously said earlier on in his political career, was created to “keep the Soviet Union out, the Americans in, and the Germans down.”

The RISE of CHINA

2. Advances in communications technology have profound effects on the ability of governments, interest groups, individuals and the media to share information across national and cultural borders.

Governments, interest groups, individuals and media organizations now have access to communication methods that have transformed the way they interact with each other and the world.

Advances in communications technology have impacted the sharing of information across national and cultural borders. Communication can be almost instantaneous, in some cases requiring split-second decision making. The expansion of news sources and delivery methods permits people to have access to perspectives from other nations. The variety of communication modes now available affords new opportunities for international cooperation and conflict.

Students evaluate how and why messages are:
Communication methods influence the ways people define and act on issues. Media messages affect public opinion on issues. Organizations adjust their messages for different audiences.

As individuals engage with others on global issues, they need to be able to communicate their beliefs and ideas with other individuals and with diverse groups.

Effective communicators, either individuals or groups, adapt communication styles to address diverse audiences by adjusting their use of communication tools, characteristics and conventions (see Content Statement 3).

Examples of communications could include examination of school-level and personal communications (e.g., memos, letters to families, texts, Web posts), as well as pieces from news programs, websites, advertisements or other media students may see in their daily life. For example, news clips may be used to illustrate how politicians use different body language when speaking to different audiences.

Opportunities should be provided for students to practice their own communication skills as they engage with others on global issues.

Deliberative civil debate respects multiple views on an issue, allows for questioning and analysis, and is solution-oriented.

Opportunities to experience these processes first-hand should be made available to students as they identify and address a global issue.

Issues on a global scale are inherently complicated and addressing them requires individuals and groups to work through decision-making processes prior to taking action.

As students practice civic participation, they will identify issues, and research, debate and propose appropriate solutions. As part of this process, students will formulate action plans, and predict and assess the possible consequences of each proposed solution, weighing the costs and benefits of each approach.

NGOs provide multiple methods of engagement for individuals and groups outside of formal governmental interaction between nations. These organizations provide an opportunity for people to cooperate on an international scale to address humanitarian needs.

Humanitarian needs arise from man-made and natural disasters. Such needs include threats to human life, human suffering, and insults to human dignity. Humanitarian needs can be addressed through various forms of humanitarian aid including medical treatments, food assistance and legal representation.

8. Beliefs about civil and human rights vary among social and governmental systems.

9. Nations and international organizations pursue their own interests on issues related to civil and human rights, resulting in both conflict and cooperation particularly as it relates to injustices against minority groups.

Resource: Frontline - On Our Watch

The International Rescue Committee responds to the world’s worst humanitarian crises and helps people whose lives and livelihoods are shattered by conflict and disaster to survive, recover and gain control of their future. In more than 40 countries and in 26 U.S. cities, our dedicated teams provide clean water, shelter, health care, education and empowerment support to refugees and displaced people. Here are highlights of our impact over the last year:

In 2018, the IRC and our international program partners:

​10. Modern instances of genocide and ethnic cleansing present individual, organizational and national issues related to the responsibilities of participants and non-participants. 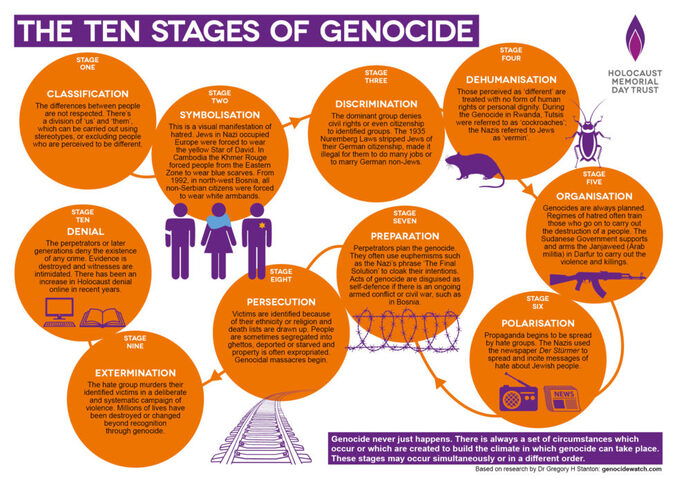 Ethnic cleansing involves the purposeful and forceful removal of a group of people from a region. The targeted groups have specific religious, national, racial or other cultural characteristics. Members of these groups are typically subjected to deportation, displacement or ultimately genocide.

Genocide involves the systematic extermination of a group of people based upon specific religious, national, racial or other cultural characteristics.

Business Insider: 5 genocides that are still going on today

11. Decisions about human activities made by individuals and societies have implications for both current and future generations, including intended and unintended consequences.

All human activities have intended and unintended consequences for ecological, social and economic systems. Individuals and societies make decisions every day that result in consequences that may impact physical and human environments today and in the future.

Both intended and unintended consequences can be interpreted as positive or negative based on differing perspectives and values.

12. Sustainability issues are interpreted and treated differently by people viewing them from various political, economic and cultural perspectives.

Sustainability issues include those that deal with the balance between economic, social and environmental needs (e.g., agricultural practices, energy use, population growth), with a focus on meeting present needs without compromising the ability of future generations to meet their needs.

Resource: Be an Energy Saver
Resource: Who Will Take the Heat?

International associations (with public and private participation) addressing these issues include the Institute for Sustainable Development, Climate Action Network (CAN) and Global Hunger Alliance. Non-governmental organizations addressing similar issues include Greenpeace International, the Rainforest Alliance and the Sierra Club.

14. The development and use of technology influences economic, political, ethical and social issues.

15. Technologies inevitably involve trade-offs between costs and benefits. Decisions about the use of products and systems can result in intended and unintended consequences.

As technologies are researched and tested, people must weigh the cost of development against the potential benefits of a new technology. Costs could be more than just financial and may include environmental or ethical consequences. Similarly, benefits of technological advancement include consequences beyond finances. The advancement of any technology involves trade-offs between multiple costs and benefits. For example, the decision to invest in research on new medical practices must take into account both the potential societal benefits of the research and the potential physical, moral and ethical hazards.

16. Nations seek to ensure the security of their geographic territories, political institutions, economic systems and ways of life. Maintaining security has political, social and economic costs.

National security is characterized by the activities nations engage in to ensure the security of their territories, political institutions, economies and cultures. Nations protect their national security through multiple means including collaboration with other nations and unilateral actions.

Maintaining security has political, social and economic costs for all citizens. Nations sometimes struggle to balance the need to ensure security with the costs associated with doing so.

17. Economic, political and social differences between global entities can lead to conflict unless mitigated through diplomacy or cooperative efforts.

18. Individuals and organizations work within, or outside of, established systems of power, authority and governance to influence their own security and the security of others.

19. The global economy creates advantages and disadvantages for different segments of the world’s population.

While some nations and peoples benefit greatly from participation in the international marketplace, other segments of the world’s population may experience economic hardship.

Global competition can lead to advantages for some people (e.g., increased employment, lower prices, increased consumer choices, rise in the standard of living).

Global competition can lead to disadvantages for some people (e.g., loss of jobs, reduced wages, exploitation of workers, damage to the environment damage, depletion of natural resources).

The global economy is subject to the influence of local, national and international governmental actions.

Embargoes and protectionism policies can be used to restrict trade (e.g., sanctions against rogue nations, protecting domestic producers through tariffs).

21. The distribution of wealth and economic power among countries changes over time.

The distribution of wealth and economic power shifts as a result of political and social changes, and developments in technology or productive resources.

22. The global economy creates interdependence so that economic circumstances in one country impact events in other countries.

Expansion of trade in the 21st century has led to a global economy characterized by interdependence. As global trade has increased, so has the economic interdependence among countries.

More than ever before, economic decisions and activities in one country have the potential to impact economies in other countries. For example, a drop in the value of stock prices in the United States will impact the American economy and the economies of countries whose investors hold American stocks. Similarly, a rise in oil consumption in Asia will have a ripple effect on the oil market worldwide and likely result in higher prices for all consumers as demand increases.